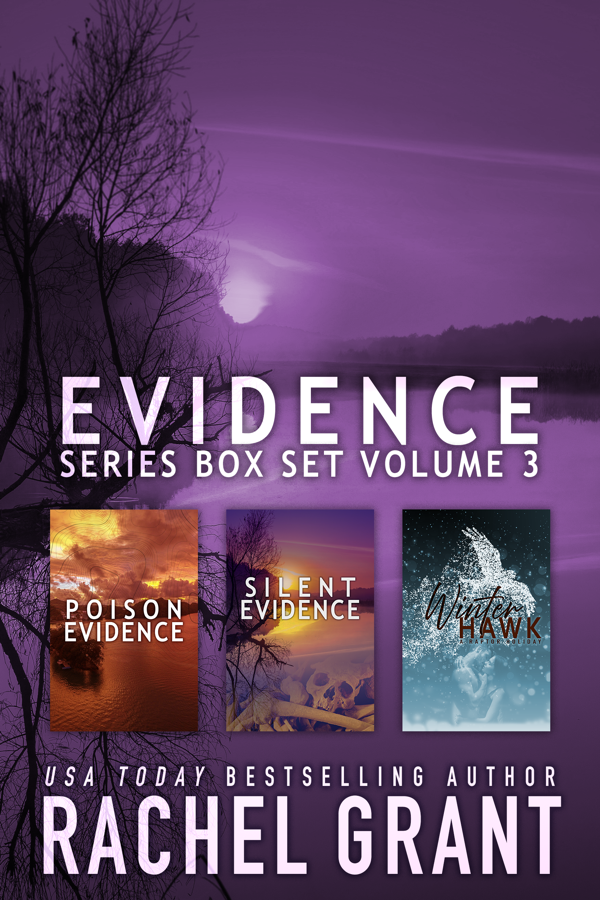 Three sexy, high-octane thrillers where archaeology and danger collide.
The adventure begins in Poison Evidence as Ivy MacLeod finds herself the at the center intrigue as spies vie for her advanced mapping technology in the midst of a tropical paradise. It continues in Silent Evidence as Hazel MacLeod finally gets the attention of the former Navy SEAL she’s wanted for years. The only problem is the relationship is fake because he’s really her bodyguard. In Winter Hawk, Leah Ellis is stranded in the nation’s capital during the holidays without money, phone, or bed. All she has is a mysterious driver who might be after military secrets.

Poison Evidence
It was supposed to be paradise….
Ivy MacLeod has the perfect opportunity to test her advanced remote sensing technology: mapping a World War II battle site in the islands of Palau. The project is more than an all-expenses-paid trip to paradise. It’s also an opportunity to distance her reputation from her traitorous ex-husband.

But foreign intelligence agencies will kill to possess her invention, and paradise turns deadly when her ex-husband’s vicious allies attack. In desperation, she turns to Air Force pilot Jack Keaton. But is he the bigger threat? Jack might be protecting her as he claims...or he could be a foreign agent. Her compass is skewed by his magnetic pull and further thrown off when she learns her own government has betrayed her.

Stranded on a tropical island with a man whose motives remain a mystery, Ivy must decide who is the spy, who is the protector, and who is the ultimate villain. She longs to trust the man who rescued her, but she’s risking more than her heart. Choose right, and she saves her country’s secrets—and her life. Choose wrong—and she risks nothing short of all-out war.

Silent Evidence
The man of her fantasies is finally hers. Sort of…
Two things haunt forensic anthropologist Hazel MacLeod: the bones of victims of genocide she examines for her work, and former SEAL Sean Logan’s rejection. But within days of moving to her cousin’s estate to take a much needed break, she finds herself faced with both.

First, she’s called in to examine a mass grave in Virginia, then, her politician cousin receives a threatening letter and insists Hazel needs around the clock protection—from none other than Sean Logan. To make matters worse, because the threat to her is classified, Hazel and Sean must pretend to be lovers to hide that he’s her bodyguard.

Sean has spent years trying to avoid his boss’s sexy cousin, but now he’s guarding her twenty-four seven and even bringing her as his date to a romantic destination wedding. As the heat between them intensifies, Sean can’t lose sight of the danger that brought them together. But when bullets start flying, new questions arise. Are the senator’s political rivals really behind the threat, or is someone trying to silence Hazel from speaking for the dead?

Winter Hawk
Raptor operative Nate Sifuentes isn’t thrilled to find himself back on the job on the first day of his winter vacation, but he can’t say no when his brother asks a favor. At least he’ll earn an easy Christmas bonus—after all, driving a fired military contractor home after she’s been escorted off base by military police can’t be that hard.

In a matter of minutes, Leah Ellis has lost everything, and now she’s stranded in the nation’s capital on the first night of Hanukkah without money, phone, or bed. All she has is a mysterious driver who might be after her technical knowledge of the US military’s drone operations.

The former Green Beret’s protective instincts—and skills—kick in when he discovers the alluring AI engineer is being hunted. On the run, they escape the winter cold by generating their own heat, but will they find answers in time to stop a terror attack on Christmas Day?