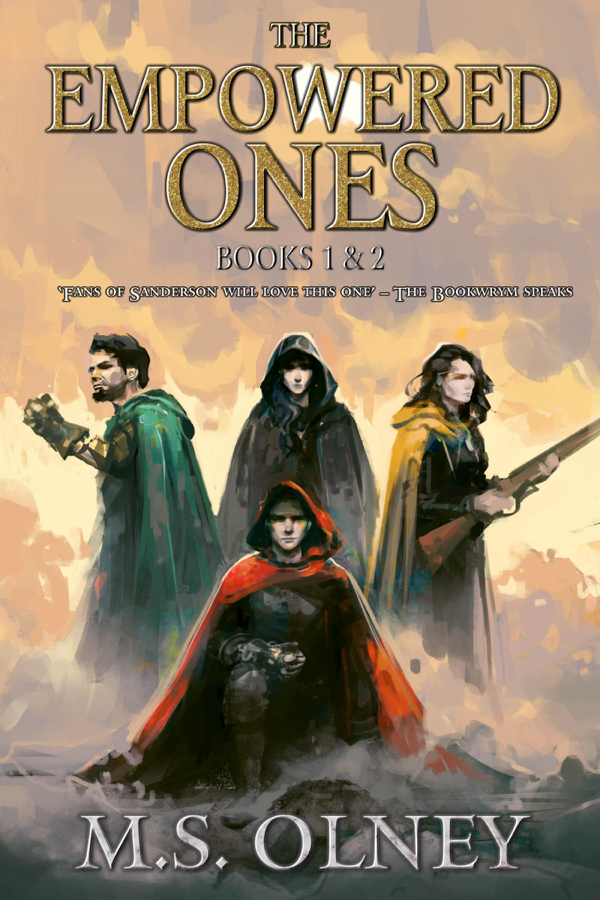 Get the first two books of the action packed fantasy adventure in the Empowered Ones series boxset!

Praise for M.S. Olney's 'The Empowered Ones Series'

'A thrilling, action packed Fantasy adventure' – Damien Larkin
'Fans of Sanderson will love this one' – The Bookwrym speaks

The Supreme rules the world.
For years, the people of her Imperium have lived in fear. Dreams of freedom are long dead for most. Those that could challenge her are in hiding.
Yet hope remains.
Following an incident, Elian, a young man living at the edge of the Imperium, discovers he possesses powers with devastating consequences for both himself and the people he loves.
Forced to flee from the Supreme's most deadly agent, Elian encounters a ragtag band of resistance fighters and a group of powerful rebels led by a charismatic leader, who believes that the key to overthrowing the Supreme lies in the ancient ruins of the once mighty Kingdom of Aeranyth.
Can Elian survive long enough to develop his newfound abilities and help the rebels turn the tide against the Supreme? Or will he die trying?

The Temple of Arrival

Betrayed.
Hunted.
The Liberators defiant stand at the city of Asta has sparked the fires of resistance in the downtrodden people. Slaves, serfs and even members of the aristocracy have risen against the regime and flock to the Liberator banner.
As conflict spreads across the world, the Supreme's gaze is fixated on Elian more than ever. Reeling from his mentor's betrayal and battle with the First Fear he is hunted relentlessly by Hollowed and Venerable Chamber Seekers.
The only person who can help Elian is a mysterious Empowered One--who he's not even sure he can trust. Terrible secrets await. Secrets about himself. Secrets that could herald the end of all things.

Temple of Arrival is the second book in the exciting Empowered Ones fantasy series. If you like action, sprawling battlefields, and power enhanced heroes, then you'll love this series.

-Reviews for Temple of Arrival-
'The Temple of Arrival is a fantastic sequel to The First Fear. From the opening chapter, we're thrown right back into the action as Elian and the Liberators, along with their Gifted allies, battle the forces of the Supreme.

'Just like the first book, the action sequences were gripping as were the plot twists. We learned a lot more about the origins of the Power which really set the scene for the dramatic closing chapters.'

'If you're a fan of well written fantasy with interesting characters and settings, then check both of these books out.'

'Matthew's ability to world-build is amazing and you can see all of the different literary and fantasy elements in this book - coupled with his capacity to shock the reader and provide plot twists at every turn.'