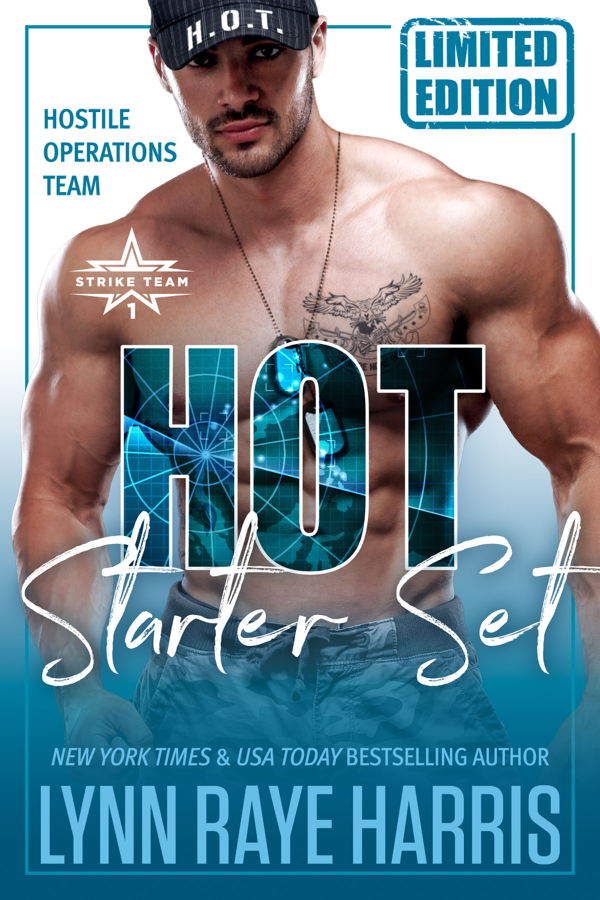 Heroes who do the right thing…. no matter the price!

Limited Edition set with SIX full novels, plus a bonus story. Start the Hostile Operations Team® - Strike Team 1 Series with this collection and get your HOT fix!

Sexy, suspenseful, and action-packed, Lynn’s books feature larger-than-life alpha heroes and the strong women who bring them to their knees. Happily-ever-after guaranteed!

She failed at life. Can she win at love?

Evie Baker lost everything that mattered. Her restaurant, her money, her self-respect. When she comes home to tiny Rochambeau, Louisiana, she’s looking for a fresh start. What she isn’t looking for is the tall, sexy, badass Cajun who stomped on her heart and left it for dead.

Hostile Operations Team soldier Matt Girard isn’t home for long. He’s been ordered to stand down after a mission gone wrong. Above all, he’s supposed to stay out of trouble. Easy enough to do for a few days.

Until Evie rolls into town with danger on her heels.

Evie’s not a warrior. But Matt is. And he’ll do whatever it takes to protect her, even if it costs him everything he’s ever worked for. Because sometimes you don’t realize what you had until it’s gone. Or what matters most until you get a second chance...

It starts with a single kiss. It’ll end with complete surrender…

Georgeanne Hayes is his best friend’s little sister. Off limits. Too perfect for the likes of Hostile Operations Team soldier Sam McKnight. No matter how badly he wants to corrupt her.

Georgie has loved Sam for as long as she can remember. But all he’s ever done is push her away.

Now that someone wants her dead, he’ll fight to save her - and he won’t give in to the need that haunts his every waking moment.

His life is far too dangerous. Too unpredictable.

She plans to convince him he’s wrong. That she’s strong enough. She’ll fight for him, and she’ll win.

She has to. Because her very survival might depend upon it…

She’s the one that got away...

Kevin MacDonald’s been in love with linguist Lucky San Ramos since the moment he first saw her. Kev let the better man have her when his teammate fell for her too. But now Marco’s dead, and Lucky’s in grave danger.

When Kev is tasked with bringing her back to HOT HQ for an explosive mission to capture a terrorist, Lucky fights him at every step. It’s not easy being forced to work with the man she once loved while also battling her deep guilt over marrying the one she didn’t.

As the mission grows more dangerous, secrets from the past get harder to keep. And when the truth’s finally exposed, their love will either rise from the ashes - or burn completely away.

If they can survive an enemy’s deadly plan…