Saving Grace: Speak Your Truth, Stay Centered, and Learn to Coexist with People Who Drive You Nuts (Unabridged) 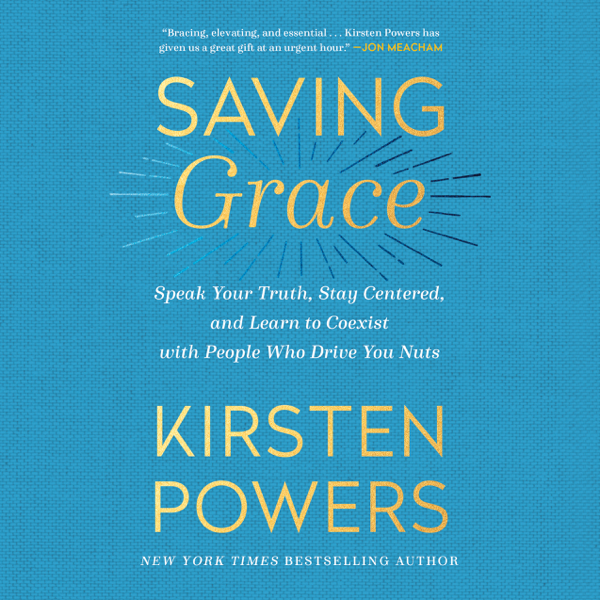 Saving Grace: Speak Your Truth, Stay Centered, and Learn to Coexist with People Who Drive You Nuts (Unabridged)

The CNN senior political analyst and USA Today columnist offers a path to navigating the toxic division in our culture without compromising our convictions and emotional well-being, based on her experience as a journalist during the Trump era, interviews with experts, and research on what leads people to actually change their minds.

“Bracing, elevating, and essential . . . Kirsten Powers has given us a great gift at an urgent hour.” —Jon Meacham

For years, New York Times bestselling author Kirsten Powers has been center stage for many of our nation’s most searing political and cultural battles as a columnist, TV analyst, and one-time participant in the thunderdome of Twitter. On a good day, there will be civil disagreement. On a bad day, it’s all-out trench warfare—nothing but a cycle of outrage and self-righteousness. More and more, Powers finds herself wondering, along with countless Americans: How are we to cope with this non-stop madness?

In Saving Grace, Powers writes with wit and insight about our country’s poisonous political discourse, chronicling the efforts she’s made to stay grounded and preserve her sanity in a post-truth era that has driven many of us to the edge. She draws on lessons offered by faith leaders, therapists, theologians, social scientists, and activists working for change today. She dismantles the widespread misconception that grace means being nice, letting people get away with harmful behavior, or choosing neutrality in the name of peace. Grace, she argues, is anything but an act of surrender; instead, it is a kinetic and transformative force.

Saving Grace offers a template for a different kind of America, one where we can engage with people who hold opposing views without sacrificing our values or our passionate beliefs in the causes we care about. It’s a culture that embraces repentance and repair, a process through which those who have caused harm can take responsibility and work toward righting the wrongs in which they have participated. It’s a place where we’re empowered to see the possibility in other people, even people who are driving us nuts.

Provocative, original, and filled with deep wisdom, Saving Grace is an essential read for anyone engaged in the struggle to live compassionately in an era of relentless demonization and division.